Writer and photographer: Tracey B

Arial: All hail, great master! Grave sir, hail! I come
To answer thy best pleasure, be ’t to fly,
To swim, to dive into the fire, to ride
On the curled clouds. To thy strong bidding, task
Ariel and all his quality.

And so stands Michael Gira, centre stage, as if on an enchanted isle, amidst his admired musical collaborators, like Prospero and his spirit, Arial, conjuring and directing his storm; arms aloft, dark brooding eyes low, conducting each swell and each lull in the soundscape that surrounds him. With gestures as bizarre as a high kick or wild whipping arms, or as slight as a raised eyebrow or a lowered hand, Gira choreographs a ballet of ballast, a tango of tinnitus. The result is a sound that’s immense, immersive; a performance that’s intimate and personal. For though I am surrounded by a few hundred other people, I feel perfectly alone in my reverie. From my position at the front, slightly off-centre, I can easily make eye contact with the band and I take full advantage of this with each member in turn (save for the keyboard player hidden behind a stack of amps) holding my gaze, brazen and steadfast, until it’s acknowledged, maybe returned with a smile. What can I say? I’m a demanding and disarmingly direct viewer. But this is the advantage of small venues and the confrontational nature of performance works best when a connection can be made with its audience. 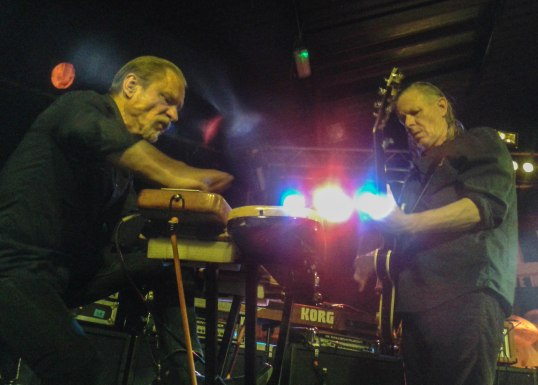 Though Swans are widely credited as the loudest band on earth, current decibel levels are bearable (I wear precautionary earplugs nonetheless) and my ears vibrate instead with high-tensile energy. The sound is far from unrelenting aural assault; the set employs clever nuances of sound and technique, contrasts and builds. This tour promotes Swans 14th studio album, The Glowing Man, and also serves as a farewell party to the current cast of players, a line-up established in 2010 (Gira intends to play henceforth with a revolving cast of collaborators). The set list comprises a mere 6 songs, yet lasts 2 ½ hours. Yes that’s right, 2 ½ hours. Anyone aware of my views would know I usually insist brevity is the key to perfect music. And while that may hold true for pop music, it doesn’t apply to the experimental arena in which Swans hold court. I’m loath to promote Sting-endorsed ideology – especially in the middle of a Swans review – but there are tantric forces at play tonight. There is something to be said for drawing out pleasure; for elongating the process to elevate the desired result. And desire is key here. Have you ever felt on the very edge of orgasm for over two hours? My skin tingles in anticipation of each chime, each harmonic touch. I am transfixed, hypnotised, breathless, wide-eyed and open-mouthed. Each note, it seems to me, is delivered with full awareness of the effect on its rapt recipients.

The structure of each song relies on a well-honed ritual; a musical Kama Sutra: The guitar begins, gentle and impassive, strumming a held chord accompanied by tender arpeggiated lap steel passes. The bass joins slowly, the back of a thumbnail rubbed erotically along the strings. My pulse throbs to a low rumble of bass drum and isolated piano chords. As the piece builds and the pace gathers, the keyboard resonates, becomes a spectrum-filling electronic choir. Lap steel and bass: a forceful assault of strings, an arduous pounding. The guitar swirls in dizzying, swelling, ascending and descending fret board patterns all pinned down by a cacophony of percussion. And Gira’s voice, so vital, so primal; a wail that cries of all human emotion. And my heart thumps and my breath quickens. And. And. Oh and… 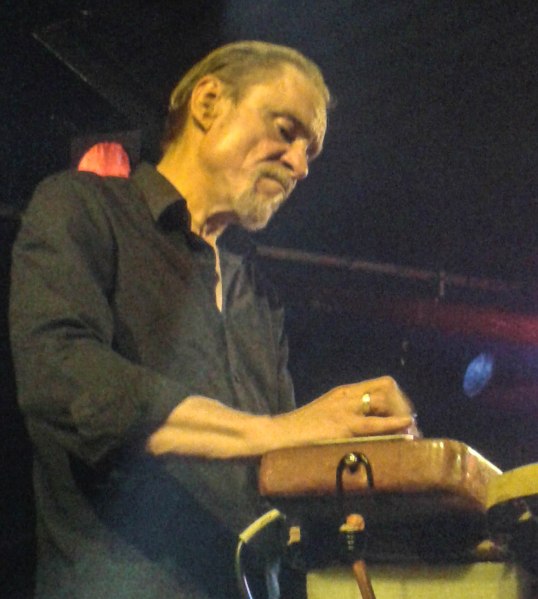 And as if to acknowledge my need for the spiritual in addition to a physical and emotional response, in one of the few gaps between songs, Gira tells a Zen story he’d heard about a monk and a tiger. A monk out walking is confronted by a tiger and in his bid to escape he runs to the edge of a cliff, his only option being to jump. Falling, he grasps onto a vine but, as he hangs, a mouse begins to gnaw at the top of the vine. Resigned to his fate of death by tiger above or the long drop below, he spots a strawberry growing from the cliff, reaches out and eats it. It was the sweetest thing he’d ever tasted. Gira says he has no particular words of wisdom to impart but to live in the present and make each moment count. Well tonight he made around 150 minutes count for everything and more. And it was the sweetest thing I ever tasted.

Search Music vs. The World